Experience 6N/7D Nepal Exciting Trip
Day 1
Arrival At Kathmandu
Arrival at the Airport, Meet and welcome by our representative (garland welcome) and transfer to the hotel, non-alcoholic welcome drinks on arrival, check in freshen up and tour program briefing, evening at leisure to explore the tourist market of Thamel, or visit casino etc. O/N at Kathmandu.
Day 2
Kathmandu Sightseeing
After Breakfast  visit:-

1) Pashupatinath.  This is the place where holy saddhus pray. The Pashupatinath Temple is a famous, sacred Hindu temple dedicated to Pashupatinath and is located on the banks of the Bagmati River 5 kilometres north-east of Kathmandu Valley in the eastern city of Kathmandu the capital of Nepal. This temple is considered one of the sacred temples of Hindu faith .The temple serves as the seat of the national deity, Lord Pashupatinath.

2)Bouddhanath, with its large stupa, this is the place where all devout Buddhists come for a pilgrimage.

3) Budhanilkantha statue of the Hindu god Vishnu, located approximately 10 kilometers from the center of Kathmandu at the base of the Shivapuri Hill, is the largest and most beautiful stone carving in all of Nepal. It is also the most enigmatic.Carved from a single block of black basalt stone of unknown origin, the Budhanilkantha statue is 5 meters in length and it lies in a reclining position inside a recessed tank of water (representing the cosmic sea) that is 13 meters in length. Called the Sleeping Vishnu, or Jalakshayan Narayan, the statue depicts the deity reclining on the twisting coils of the cosmic serpent Shesha (Shesha is the eternal, multi-headed king of the serpent deities known as Nagas, and also is the servant of Vishnu). Vishnu’s legs are crossed and the eleven heads of Shesha cradle his head. Vishnu’s four hands hold objects that are symbols of his divine qualities: a chakra or disc (representing the mind), a conch-shell (the four elements), a lotus flower (the moving universe) and the club (primeval knowledge). After then

4) Swayambhunath the golden spire of the 5th-century Swayambhu stupa is adorned with a colorful fluttering of prayer flags; it crowns a hill overlooking the Kathmandu Valley and offers fantastic views over the city of Kathmandu. Swayambhunath is one of the most recognizable symbols in Nepal and the painted eyes of Buddha watch all who ascend the worn stone steps. Overnight at Kathmandu hotel.

Day 3
Kathmandu – Manakamana – Pokhara (200 kms/5-6 hrs)
After breakfast check out and drive to Pokhara. Enroute cable car ride to Manakamana (02 hrs) reach and O/N at Pokhara.
Day 4
Pokhara Sightseeing
After breakfast half day sightseeing including (David’s Fall, Vindhiyavasini Temple, Seti River Gorge, Gupteshwor Mahadev Caves, Museum) evening boating on Fewa Lake and free for shopping etc O/N at Pokhara.
Day 5
Pokhara- Chitwan (155 kms/4-5 hrs)
Early morning see the sunrise and excellent view of the Himalayas (Dhaulagiri, Annapurna, Manaslu, Ganesh and Langtang Himal). After breakfast check out and drive to Chitwan, reach and check into the hotel, after lunch jungle activities and O/N stay at Chitwan.
Day 6
Chitwan To Kathmandu 8 hrs
Early Morning you can do the jungle Safari . After Breakfast transfer to Kathmandu & Check into the hotel. Dinner at hotel. Overnight stay.
Day 7
Kathmandu – Departure
Before breakfast, drive about 1 hours to the Nagarkot hill station 2200 m height. For the refreshment walk around hotel in a fresh air and see the lovely view of sunset from the top of Nagarkot. Return hotel Have Your Breakfast Check out & Proceed to Kathmandu airport for your onward journey. 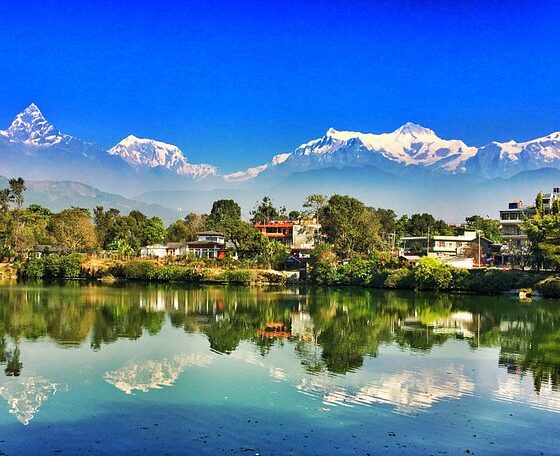 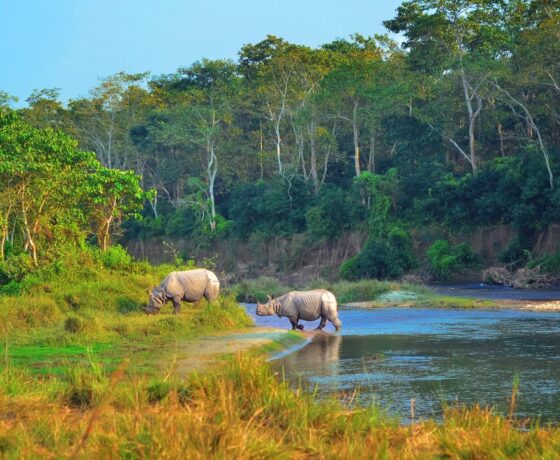